In Nicaragua, the first set for DigitaLife 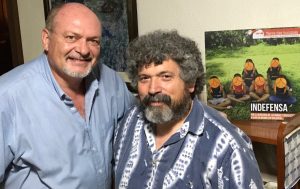 Nicaragua will be the first international set for DigitaLife, the collective film that will describe the changes that have taken place over the last twenty years with an approach looking to the future. Since Monday, 22nd May, part of the production will be in the Central American country to meet some communities and gather their experiences (see the video on the preparations for the trip). Terre des Hommes Italia, the humanitarian organization active in 20 countries around the world with 72 projects in favour of children, teenagers and their communities, becomes a partner of the project led by Francesco G. Raganato and produced by Varese Web, which will be realized thanks to video contributions produced by citizens.

“We chose to contribute to the project,” says Paolo Ferrara, manager of Terre des Hommes’s communication, “because Varese Web links us with a story of innovation and solidarity that started more than 5 years ago with the creation of a web platform that has enabled us to Involving thousands of children in Nicaragua in projects of active citizenship and community awareness. It was the beginning of a journey that still lasts and we hope will lead us to explore new ways of helping children and new ways of telling what’s happening in the world. Today, more than ever, we have not only the duty, but also the need to build bridges and create bonds with those that live in extreme conditions of isolation and poverty. With those that also contribute to preserving our own living conditions, protecting one of the most valuable biosphere reserves in the world. Technology and narration can make a valuable contribution in this direction.”

The trip to the Central American town will have as protagonists some communities living in Los Guatuzos, a natural reserve in the province of Río San Juan. In the area, reachable only with a long boat trip first to Lake Nicaragua and then along the Papaturro River, there are about 2,000 people living, about a quarter of whom are children. Terre des Hommes assures the teaching and child protection activities thanks to the work with different localities and with the schools of the small communities in the area. The current project manager, Giori Ferrazzi from Varese, will accompany a crew of the film: “The active and responsible participation of the people is certainly the strongest stimulus of our presence in the Biosphere Reserve de Los Guatuzos, a fascinating place, but with huge problems linked to extreme poverty and basic needs that are not yet resolved.”

“Five years ago,” said Marco Giovannelli, president of Varese Web, “we developed a communication project to support the activities of children and teenagers followed by Terre des Hommes in Nicaragua. It was an extraordinary experience because in some areas of that country technology completely changed people’s lives. An internet connection, thanks to the energy produced by a solar panel, allows hundreds of children to be less isolated and to keep in touch with their peers in different areas of the country and even with distant children. It is a perfect example of what it means to bring connectivity. There are incredible stories that can tell us a lot and become part of DigitaLife with a different look. We are delighted that Terre des Hommes has decided to join our project and thus bring a valuable contribution to the film”

Since the launch of the project, the first hundred videos have already arrived. There are so many different descriptions about the relationship in your life with the digital and the Internet. “Work is going on and we will build the film with you,” says Francesco G. Raganato, previously director of documentaries for Sky and Rai. “It will be collective work in the truest sense of the word. The will is that of creating a community that gives vital life to the film day by day. It’s a challenge in every sense, starting from the fact that we will give everyone the opportunity to tell their story and share it.”