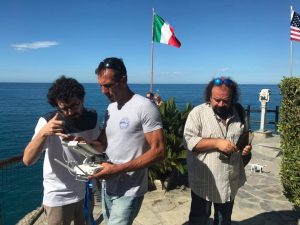 DigitaLife is hunting for stories. Your stories. In addition to the videos that you can send, the producer and director Francesco Raganato are on the go to find stories between digital and reality. From 2nd to 4th July, therefore, part of the production moved to the Cinque Terre Park, which became partner of the film.

There have been numerous encounters made by the director and producer, as well as filming for the final editing of the film, also thanks to the use of a drone, to capture the beautiful panorama of the park.

But not only: from the story of Roberto and “his” bees, to the encounter in the middle of the sea with Guido, a fisherman and farmer in Corniglia, there are so many stories that could enter the DigitaLife movie.

We just need to wait and know these emotions better. In addition to waiting for your stories. Sending your video contribution is very simple. Just follow the instructions here: